When Barry and Kathy Strine threw family get-togethers for their three children and seven grandchildren at their York County home, the family was never exactly together – a few people would be in one room, a few more in another, and so forth.

It’s why after watching “too much” HGTV, Barry says, a term he frequently heard on the network appealed to him: open concept.

“Our space was totally dated,” he says. “With three kids and college and everything else, we kept up the home in terms of paint and carpet throughout the years.

So, Barry and Kathy decided the kitchen and living area of their 1980’s home needed a makeover.

The Strines turned to Paul and Lora Deller of Red Oak Remodeling for their big project.

Red Oak celebrates 30 years in business this year. For half of that time, the two couples have been friends. They’ve also had a professional relationship, as Strine’s Heating and A/C is a trusted vendor for Red Oak projects.

Both companies are also members of the York Builders Association, something that was important to Barry, a former YBA president.

“I’m a very driven, very loyal supporter of the association,” he says. “I believe in its members: they have ethics; they have a moral compass; they’re the type of people I want to do business with. They’re local people.”

“That was foremost for us in selecting someone to work with,” adds Kathy.

To fully appreciate the new space, Barry and Kathy say today, you have to picture the old one: The front door opened to a formal foyer. Archways and doorways connected separate living and dining rooms and the kitchen. Everything was very enclosed, and walls kept the space “cut up.”

The Red Oak team knocked down walls to create an open floor concept. They added a large island with a utility sink, wine refrigerator, and other amenities that they didn't have before.

Now, stepping through the front door leads to one large and airy living space.

“From the cut-up version to the wide-open version is like night and day,” Barry says.

Everything they want is in the new space.

"Drinks, cooking, right here in the same room," Kathy says. "We’re sitting at the bar, talking. It’s so nice. It’s an area where all the activities happen."

The Strines revealed the remodel to the whole family with an Easter celebration.

Not only did the space look beautiful and fit everyone, but the updates made entertaining easy.

The electric stove is now gas. There's an extra sink in the island. The smart appliances mean the Strines can hit one button on the oven that perfectly cooks the ham, roasts a chicken, or bakes lasagna.

“We probably had 22 people here, and we were all in the same area talking to one another, and it was just great,” Barry says.

“It’s that part of the kitchen where, in today’s society, we can still come together as a family,” he says. “It used to be the dining room table. It’s a point of interest, a point of conversation. We’re talking to one another instead of being on Facebook.”

“From the start to what it looks like now is just amazing,” Lora says. “They’re still in awe.”

That sums it up pretty well.

“Drinks, cooking, right here in the same room,” Kathy says. “We’re sitting at the bar, talking. It’s so nice. It’s an area where all the activities happen.” 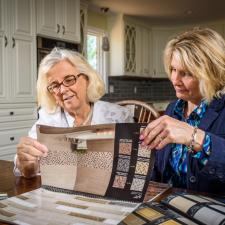 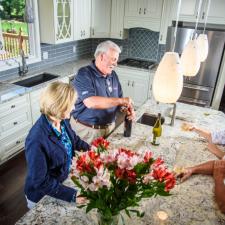 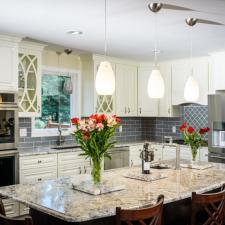 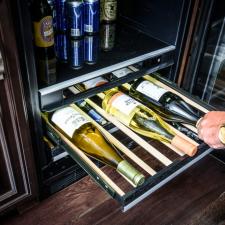 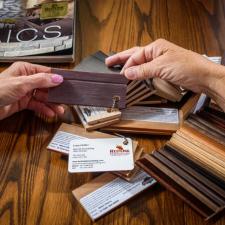 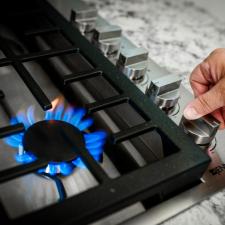 Products Used: Pella Doors, Blanco Sink, Elias Cabinetry, Rev-A-Shelf Storage units, Karndean LVT
Client Review: From start to finish Paul and Lora Deller were concerned and active in every stage of the planning and decision process for our homes renovation. They had positive and helpful information for every stage of the project including cabinet selection and color, floor type and color, granite counter tops, lighting and even the drapery. The project is on schedule and looks fantastic. Paul, Lora are totally hands on and the craftsmanship from Steve and Rodney is top notch. They take the difficult and make it simple. If you're planning a home project, you owe it to yourself to discuss your plans with the experts at Red Oak. This experience has been a wonderful journey. Thanks Paul & Lora Barry and Kathy Strine
- Barry and Kathy S.

If you are looking for more information about whole house renovations in York then please call 717-244-4711 or complete our online request form.